Black bass anglers can contain largemouth bass in live wells for an hour or more during the day. To keep bass alive in the live well, anglers use recommendations of their peers, tournament organizations, or state agencies. Sometimes, these recommendations are inconsistent. Improper operation of the live well can lead to dead bass at weigh-in scales or at the end of the fishing day.

TBF of Md Conservation Director poses with one of three Monofilament Recycling bins he and his Wife, Tanya, installed at Smallwood State Park

5/1/11 – Drew Lofton became the Maryland Federation Conservation Director in March 2011, then attended the National Championship in April where he attended the TBF Conservation Meetings, led by TBF National Conservation Director, Mark Gintert. After attending, Lofton had some ideas for his Federation. The day he got back from the meetings, he told Gintert about his plan to start a monofilament  recycling program. He had noticed that tubes didn’t exist in alot of places where he fished. ”I had previously lived in west Palm beach for about 5 yrs, and they are everywhere down there, so I thought what a great “first” project for our Federation”.

Gintert told him about a program where BoatUS would donate the tubes, so the MD Federation didn’t have to spend alot of their own money to begin this project. BoatUS donated 20 pre-made recycling bins (about $1000.00 worth) to the TBF of MD. So far MD has only gotten “permission” to put them in 3 locations; the fuel dock at National Harbor (which will be hosting an FLW event in June), Smallwood State Park, and Fort Washington Marina. TBF National office sent TBF/FLW Partner in Fishing stickers to post near the tubes.

Lofton is in the midst of conducting a survey, with the help of the DNR on which ramps have recycling tubes, and which ones do not. “Ideally we would like to see one at EVERY boat ramp, and all the high fishing traffic areas,” Lofton said.

I caught a snakehead fish 4-17-2011 on the Northeast River near Anchor Marine . it was approx. 4.5 lbs and was about 21 inches long, the fish was destroyed. I didn't know if there were others caght in this area.

DNR RESPONSE via Joe Love, Fisheries Biologist This is this first reported snakehead caught in Northeast River. DNR applauds the actions of Mr. Lauer to remove and kill this invasive species which has now appeared for the first time in the upper Chesapeake Bay. Please spread the word to fellow anglers to handle any snakeheads they encounter similarly.

In an effort to stem the spread of the invasive snakehead fish the Maryland Department of Natural Resources (DNR), the Potomac River Fisheries Commission (PRFC), and the U. S. Fish & Wildlife Service (USF&WS) are providing an opportunity to win prizes for anglers who catch, kill and enter photos of the snakeheads through the popular DNR online Angler’s Log social fishing site. A photo of the killed fish must be submitted to be entered into the contest. Read More → 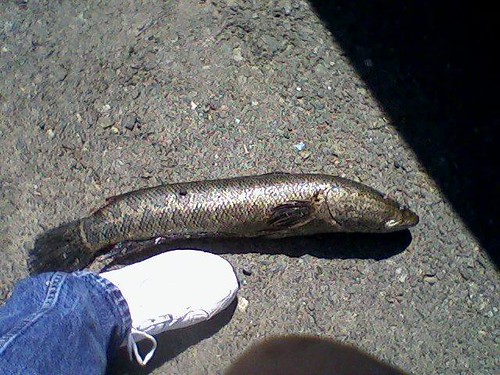 
Maryland Fishermen and Others Who Value Our Fisheries Resources,

I want to ask for your help to prevent reductions in funding for land conservation in the Maryland Senate's proposed budget. These funds will be used by the Department of Natural Resources to conserve natural land and working farms and forests that are essential for healthy waters and fishing. Your e-mails and letters that followed my request last month made a difference in preserving land conservation funding in the House of Delegates budget. However, I now need your help in preserving funds for conserving natural land and working farms and forests in the Senate budget as the legislative session nears an end. A decision about funding will be made in the next few days, so I need your help right away.

Several land conservation programs are at risk. Program Open Space funds help state and local government buy open land and build park facilities. Funding for local government open space purchases has been preserved in both chambers of the legislature. However, a "Stateside" fund to purchase land for state parks, forests, and wildlife habitat has been eliminated in the Senate budget. Two other land conservation programs (Rural Legacy, and the Maryland Agricultural Land Preservation Foundation) have also been eliminated from the Senate budget.

Natural lands and working farms and forests are needed to keep water healthy for Maryland's fisheries. Fisheries decline or disappear entirely in developed areas and I am concerned about how loss of natural land, farms and forests will degrade fishing for future generations. These losses are growing as Maryland becomes more developed. There is great potential for future losses of treasured resources such as brook trout, largemouth and smallmouth bass, striped bass, herring, shad, and yellow perch to development without sensible land use planning and adequate funding for land conservation. These losses will not just impact fishermen and people that eat local seafood, but will affect animals that use fish for food or share their need for healthy water.

Oops! This site has expired.

If you are the site owner, please renew your premium subscription or contact support.